My worst case and a deadly injured patient (XC700) … 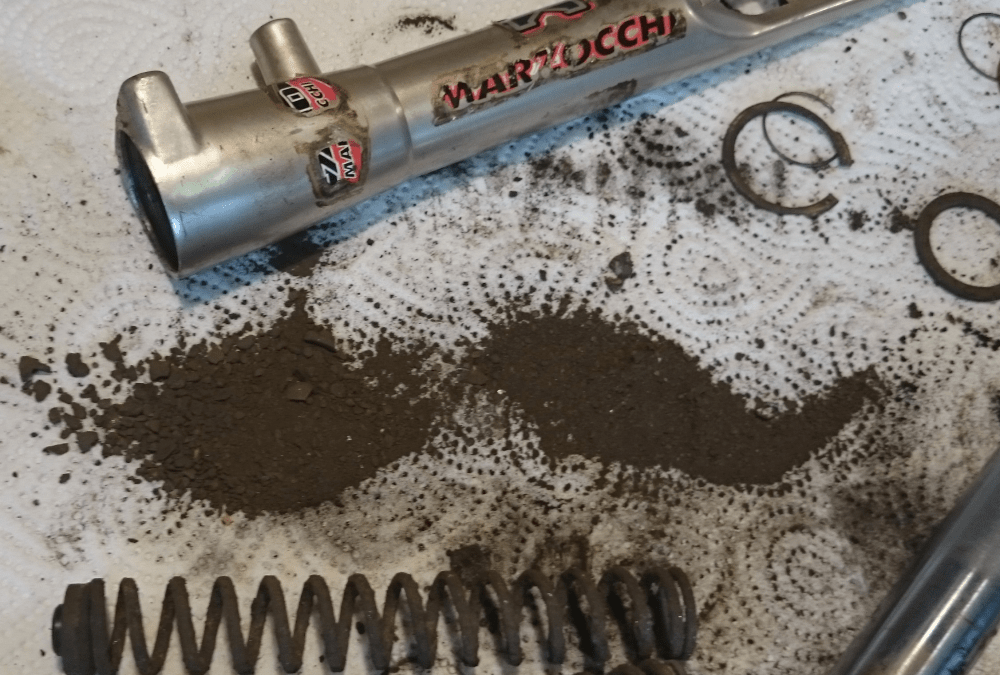 Well, this was my very-very-very worst case of a service I tried & promised over the last weeks. It is a golden XC700 from Australia.
Brian is a very nice and friendly guy from Australia and wanted a full rebuild including decals for his older custom bike from the 1996 (Brian, can you add some infos about the bike, please??) with a mounted XC700.

He asked me to help and service it and I said – as I always did – “yes, no problem. I have all the spare parts I need and if a part is broken, I will change it also by using used spare parts”.

Be sure: I will keep my big mouth more shut and will look a bit more in detail in the future but anyway: I will continue doing my very best to get every user of such an older Marzocchi fork riding it again – as I did also with this one.

I was sent some pictures before I received the fork just for identifying, it looks not very well from the outside. But I did not expect, what I found in there during working on it …

When the fork arrived and I checked it I got my first surprises:

O.k. What can we do to this deady injured patient? We need to sent it into deep koma and open his thorax to be able to examine his condition.

So I tried to dissassemble the patient … and I can tell you: It was the hardest one I ever had. I don’t have pictures about the tools – most heavily used a press and some liters or WD40 – but in the end I got it open and saw what we have here … and the whole damage.

After opening the tubes I found most of the Australian desert inside … what a mess!!

In the end I took some spare parts from my various boxes (lucky me 🙂 and built a complete new fork as I couldn’t use any of the parts again. So the only thing which can be reused is the fork crown. Brian got a complete new, 100% functional nice looking fork back. As he managed to buy XC700 sticker somewhere on the net he will have it as it’s best.