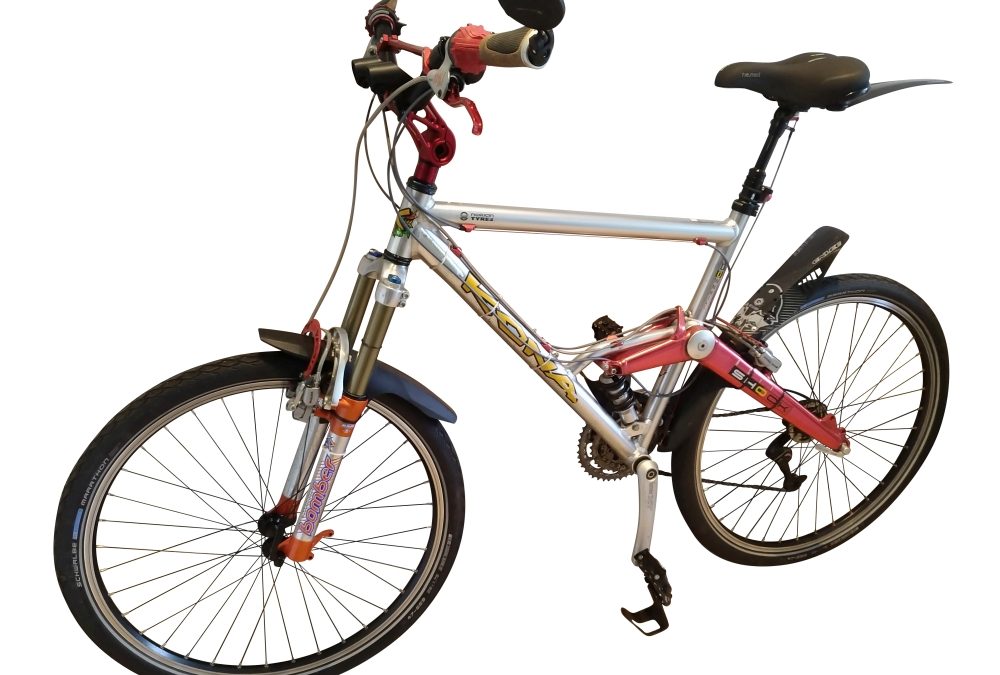 Over the years I had contact to a lot of bycicle freaks and parts because of my Marzocchi forks. I got some bike frames and parts by accident. Apart from all the work around my Marzocchi suspension fork parts I had less time to create something usefull with all the bike parts I own.  Shame on me!

For about 8 years ago I bought a fancy fully frame with cool KONA stickers at RetroBike, which I liked the first time I saw it. It has a cool single swing arm on the rear with a rear shock in the center of the frame. And it has disc mounts.
Compared with catalog photos it seems to be a KONA EFS from 1994, as this one was the only KONA one using this frame. But the catalogue photos showed other colours (silver frame with blue anodized cable mounts). May be it is a KONA special edition?

So here are the main identification pictures from Sintesi and Kona catalogues from 1994/1995 :

[ngg src=”galleries” ids=”64″ display=”basic_thumbnail” thumbnail_width=”60″ thumbnail_height=”40″ thumbnail_crop=”0″ images_per_page=”6″ number_of_columns=”6″]Can’t imagine someone takes a Sintesi frame and changed the decals to Kona? Sticker looking very good, no fancy selfmade ones.
The other sticker are the same: the ‘Active Shock’ one on the red back swing, the ‘Downhill…’ one the seat post tube and another on the hoizontal tube near the seat post. My rear shock has no label but searching around it seems to be a Marzocchi C25 with oil-/air suspension.

Here are pictures about all stickers on the frame :

For the files : As you might know in the beginning of the 90’s fork suspension becomes realy modern.  This frame (Bromont – and it’s brothers and sisters aká Thruster, X-Wing and Hantrax)  had been designed by Marzocchi and produced by the well known company Velicchi (the Italian specialists in aluminium), which produced a lot of frames in the beginning of the 90’s. All this frame have nicly done weldings, have ‘NV’ (Nico Verlicchi) on the seat post tube and/or a ‘Verlicchi’ embossing on the dropout. I think Sintesi than customized the frames and sold them.
The name ‘Bromont’ might be used because of some worldcup races which has been won by Dave Culinan using such a (preproduction) frame?

This Bromont – so called the 1st real downhill bike – had been very successfull in this period, e.g. well known names are Dave Cullinan, Cindy Devine, Penny Davidson, Rob Warner, Andrew Shandro and others who won several world and top level championships plus a million races/series in the lower classes. Some called the Bromont a ‘downhill only’ frame setup, because it had been designed early in the fully period and had some problems in stability and swinging during riding.
Also a lot of frames had been sold by various other companies, they created custom configurations and sold them under their own brands. One example is this KONA frame, other well knowns are the brand Iron Horse, Diamond Back Dual Response, Rudy Project Downhill, Saracen, Bogner etc. pp.

Marzocchi designed the frame, surley they used almost all of their front suspensions forks for the setup. I have seen purple and blue XC400`s, purple and blue XC500`s, XC600 / XC700 in silver/titanium/gun metall blue/red, XCR, DH3 in red and green. All this forks have ca. 51mm travel, except the DH3 with 77mm travel. Except the XCR (badly painted) all forks had been anodized, which makes very taff surfaces! All this coloured forks made it easy to customize such fancy, colorful bikes.

(Gallery about Verlicchi  / Sintesi Bromont bikes from the net)

This (Kona) frame is one of the later ones from this fantastic period of bike (suspension) history, as this has disc mounts on the left side of the back swing.

Other known production changes for the Bromont frame found on the internet :

Now it is has been time to make a rebuild, not one into original status but with a little changes for my needs.

Back to my setup about brakes : Most of our familiy bikes have older Magura HS22 or HS33 (there are new generations, e.g. HS22 in 2015), which are unbelievable and absolutly rock solid for more than 20 years. No need to change!! Newer ones are not a good choice because of alle this crazy weight tuning and plastics. Additionaly the Evolution II adapter makes it ugly, as it adds a fancy (?) brace to it. Spare parts market is great, original sparse are still available.
This makes it easy to repair or exchange. My first decision was a red John Tomac HS33 edition. I think I have them for more than 20 years, they never failed.

Than during my recherches I found out about the Magura Anniversary editions which fit perfect because they have red brake levers (anodized)  :

Magura 10th Anniversary : limited to 1500 pieces and born in 1996. Technology was from the Race Line. Had red anodized CNC levers where you could only adjust the brake shoes with an allen screw. Not sure about HS22 / HS24 / HS33 and Kolben diameter (a, b).

MAGURA HS33 20th Anniversary : 2007; limited edition Magura HS33 to celebrate their 20th anniversary. The main differences are that it is finished in a gun metal grey powder coat, it has a CNC blade which is anodized red and an anodized red booster. Shipped in a bag. There are only 800 worldwide (c).

If you continue searching you will find a great number of custom products for braces and levers with a lot of anodized parts in all colours. I went for the 10th one because of the levers, not that cheap but I wanted it and I got it.  😉

(Gallery about 10th and 20th edition)

I needed to open the back break line (Stahlflex), because I wanted the line passing the center frame hole and 2 cable mounts. After venting the brakes are working 100%.

Update 20200722 on Magura Stahlflex brake line : As I’m planing a new handlebar with more rise (like the older downhill ones) I need a longer stahlflex brake line. As I know all this brake lines are produced by Spiegler in Germany for many years. I think they have a monopol on it. You can buy brake lines at Ebay, not that cheap. I got a call the next day asking about the correct length (standard length for front brake is 900mm, which is f### long). Thats’s a good service! I talked to the chief himself nicely and he explained, that they nowadays are pressing both ends of the Stahlflex lines because of problems with the screwable ones (on my HS22 one side is screwable and the othe side is pressed). I was afraid of problems with fixed ends during assembly on the Magura, but he told be that the pressed ends will be rotatable. He asked for the version of HS22, he confirmed knowledge about the 10th Edition as the older and that there is a newer one from 2008 with the same name ‘HS22’. We agreed to measure the exact length and talk about next week. Cool!

The brake line connector details for the Magura 10th Editon are:

My first attempt was to mount used parts from my boxes and my older bikes, make the bike rideable, test the frame and suspension  and than decide to update it a bit to my needs or sell it.

Just an update on spares : During working on cable mounts I was searching a long time for red anodized cable mount replacements and found some at AliExpress for less €€, one in a package.

For my rebuild I ended in moving 2 cable mounts from the left back swing (for disc brake lines) to the center frame, but need to drill it out.

Now I’m also in need to have some open cable mounts to be able to exchange also the back hydraulic line (new pressed Stahlflex – it is also a little bit to short) – it won’t fit through closed cable mounts.

So this little wonderparts can do this trick. I received this today – you can order in all colours and the hole – hole distance is the same. You can use the black clip to hold the lines or just use some cable ties. I like it 😉

Check out AliExpress for other anodized parts, it is a great source with less prices.

And here is all data  about :

Handlebar : black (Type?)  (Changed to another one with more rise)

You were not leaving your cart just like that, right?

Enter your details below to save your shopping cart for later. And, who knows, maybe we will even send you a sweet discount code :)