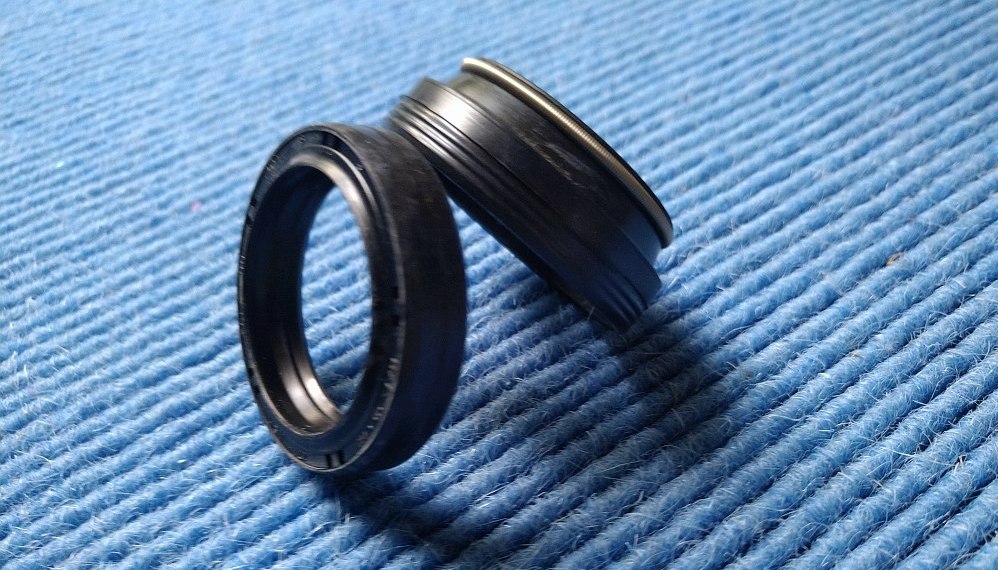 What you see o the picture is a set of original 30mm Bomber seals, left side the inner oil seal, right side the outer dust seal, here the M-Arch type.

Well, there are some little replacements like the enduro kits, which replacement seals and this very special blue silicon outer dust seal. I can’t believe that is working. There are very expensive SKF seals, but this are available startig with 32mm and 35mm seals and are green. Some others told me about seals which shall work, but fit not exact the Bomber dimensions.

As I do have connections to production plants in Asia and already did 2 very successfull runs in the last 3 years by reproducing seals – I did the outer dust seals 24 and 26mm – I’m on the way to order another reproduction, this time for 30mm Bomber seals.

I will do the both inner and outer dust seal, I think I go for the M-Arch outer dustseal, as this fit’s in both Bomber 30 seal types: the M-Arch and the older ones with the classic edge. If it works well, I will also do the older ones.

I had some problems to find some last master pieces which I have to send to my producer. He will do the measurements, checks the inside (this seals have a metal sceleton inside to make them stiff) and creates the suitable moulds.

I’m very excited about the production, the result and more about the selling later. It is a little adventure, as I don’t know how many seals this world needs. If I asked typical places and shops about selling seals they told me :

And I think I can it do under the typical eduro seal kit price! I did not make it selling the 24 or 26mm seals to bike dealers, except some single sells, but I will also try with the 30mm.