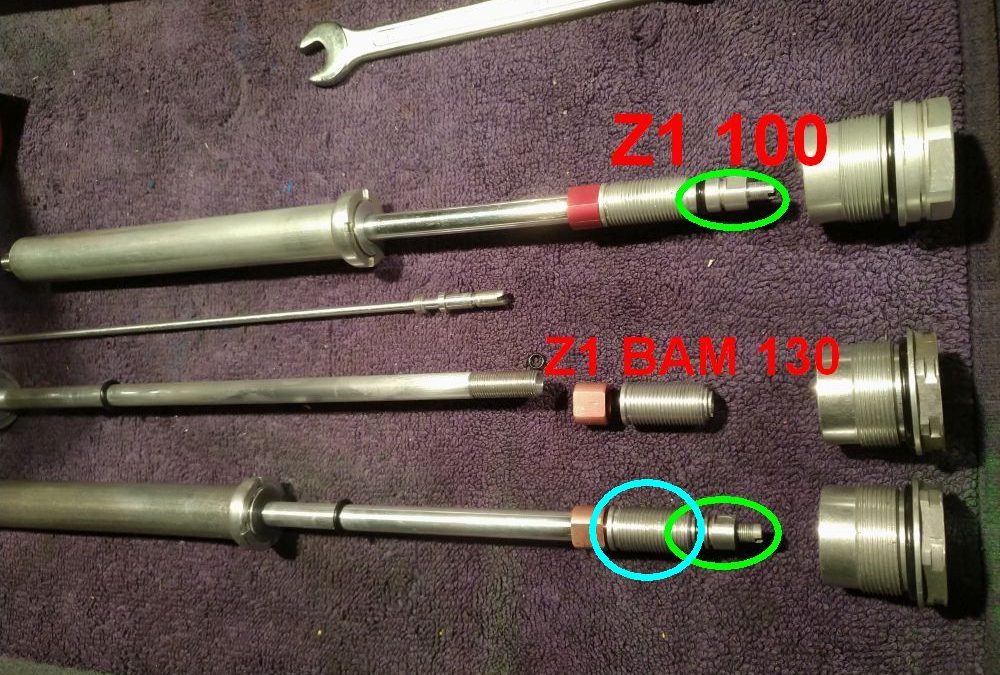 During the last weeks I built a bike around an old but famous Verlicchi/Sintesi downhill ‘fully’ frame (aka ‘Bromont’) from about 1992-1995 and I can tell you : I have a lot of fun with it!

The BAM is technicaly like a standard Z1 but with this changes :

Here this the BUT! of the story.

I bought a Z1 BAM with 130mm travel from 1999 via Ebay Kleinanzeigen. The fork had the right height and was promoted as ‘.o.k.’ with no technicak errors, but unfortunately the top of the left cartridges had been broken – just the part per the knob is screwed on. I believe someone teared it off without knowledge and sensitivity. Argh!!

This is the most important part of the fork, most of the others can be replaces easily, but usualy cartridges are dead as dead and for about 21 year old parts there are no replaceables. Additional the Z1 BAM from 1999 with 130 is not that spreaded than 100mm tavel forks. There is another Z1 BAM from 1997 with 100mm, I hoped to get one, but nada. The fork was so far in nearly accaptable conditon, oi was nearly out, but bushings feel o.k. I do not care about oil seals, knobs, crown, screws or steerer as I have all this as replacements spares in stock.

So, what can I do? I inspected my other Z1, a 100mm travel Z1 from 1997 and I realized, that the top of the cartridges are similiar. The tops are looking the same, but there are little differences. So I had to compare in detail …

The seller agreed about paying me a little fee back because of the damage – this is extraordinary friendly and very fair. Thanks, Chris!!

20201024 updates: By searching around I met a very friendly guy in polen online who was able to sell me some cartridges for the Z1 and the Z1 BAM, some are NOS, some used but from excellent conditions. My Z1 BAM is running, but I have all spares for reparing now, including seals and bushings. 🙂
I will be able to rebuild and sell the Z1 classic (100mm, 1997) now. 👍✔

You were not leaving your cart just like that, right?

Enter your details below to save your shopping cart for later. And, who knows, maybe we will even send you a sweet discount code :)